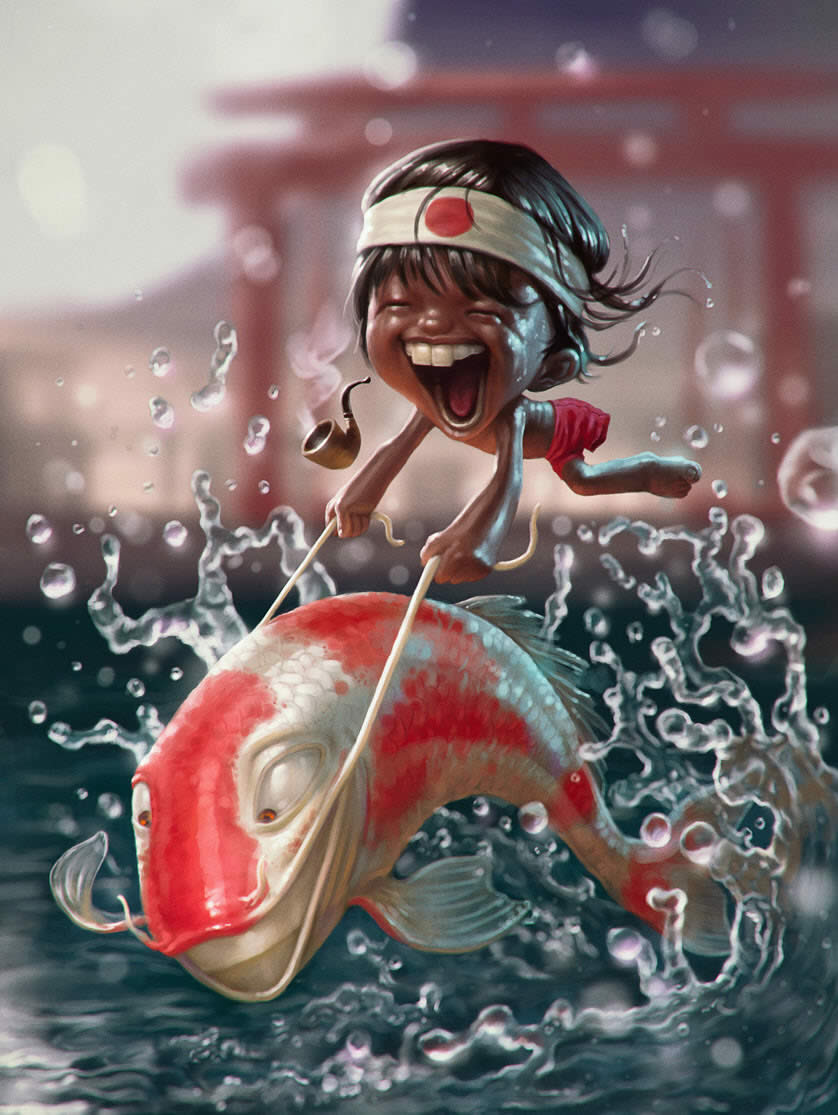 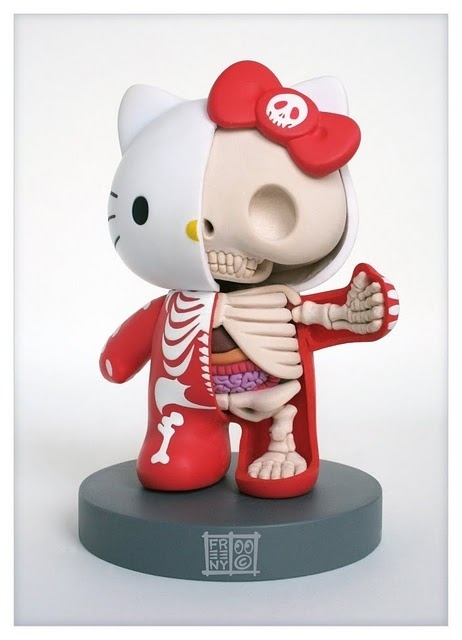 Culture Buzz Artist Jason Freeny is back with more dissected toys that show what our favorite childhood icons look like on the inside.

Contrary to 2D or 3D animation, in stop motion the characters are solid and three dimensional.  That has some pros (you get to hold your puppet and play with it, even rip its limbs off once the shooting is done like you did with your toys when you were a kid), and some cons, the main one being the possibility that your puppet will fall apart before you get to finish the piece youʼre shooting.

When working with characters in stop motion animation, the most important thing to be sure of before you begin shooting is that your characters wonʼt fall to pieces in the second shot. The process of animation is very rough on the puppets, so they need to be strong enough to hold up through a number of shots.

When designing a stop motion puppet, you should start by establishing the moves it will make and the actions it will go through. That will allow us to build a proper skeleton and choose the materials that would help us fit the characterʼs needs.  Although it is a part that is not seen, the skeleton (or more properly called, “armature”), is the most important characteristic of the puppet.  The armature is the thing we will rely on most for a successful animation process.

Apart from covering the characterʼs needs, a proper armature requires a few other important characteristics: it has to be strong enough to support the puppetʼs weight, it must hold whatever pose the character is put into without falling or moving, it has to move smoothly from frame to frame without popping, it must not hinder the puppetʼs movement and it has to be able to be manipulated without popping into uncontrolled movements.

According to my personal experience, the most reliable and easily achievable materials for good quality armatures are wood and wire. If the budget allows you to hire a professional to create the armatures with top-quality materials then great, go for it. But for us reckless animators that take joy in building the puppets ourselves, some other more attainable materials can still work pretty well.

For example, in a project I worked on not long ago, I used a wood and wire skeleton for each of the puppets. Because their movements were limited, I did not need to work on flexible joints. However, after some time I learned that even with limited-movement puppets, it is always a plus to have a wider range of movements.  So I started to develop different kinds of joints for different parts of the body.

Braided wire is a good option for arms and legs because it allows me to keep the proportion of the thin limbs I usually design my characters with. However, after some hours of shooting, the wire usually wears out and snaps. That is why I use interchangeable arms that can be removed with screws. This way, I can replace a broken limb without having to replace the whole puppet.

For me, what works best is a combination of wooden balls and metal plates held together by a screw. The rods that form the bones of the puppet attach to the wooden balls which form the movable part of the joint. The tighter you screw the balls and plates together, the more resistant the joint is.  This is particularly helpful in regulating the pliability and resistance of the joint, depending on the movement that it is supposed to achieve.

The characterʼs head needed too much precision, especially in the lateral movements. As for the rest of the body, I used braided wire that I later covered with a thick cotton thread to add volume and stiffness.

With the basic matters concerning armature building covered, I would like to add one last thing: even if it is not always possible to have two (or more) handmade puppets that look exactly similar, it is always advisable to at least have interchangeable duplicate limbs.  The methodical nature of stop motion animation requires a character to be used and abused and some structural damage is always expected.

The process of Stop Motion requires a lot of patience and good observation skills. Many times, in the middle of the procedure, one can succumb to temptation and abandon the process to continue it in 3D.  So far I havenʼt seen any technique, however advanced it is, that could replace this old way of animating.   With this technique, we can always achieve a magical and handcrafted look.

Carlos is a multi-faceted artist who has successfully made incursions into various forms of art creation. As a writer, director, animator, illustrator, painter and photographer, his ability to tell stories and his unique visual universe led him to devote himself entirely to filmmaking.

In 1997, Carlos graduated from Law School.  However, he was captivated by his artistic vocation.  Carlos founded his own production company and began to develop commercials for large international companies. At the same time he wrote, produced and directed several personal projects for which he won international recognition.

TotallyCoolPix is all about the images and this is a retrospect all about the years 2000-2010 aka The Noughties. We could write about September 11th 2001 or the tsunami or countless earthquakes or the Middle East conflict or Barack Obama or Michael Schumacher or Saddam Hussein or Facebook or the human race. But we’ll let the pictures speak for themselves. Note: The images are in no particular order, some contain graphic scenes and they are the personal choice of the editors. If you miss something, we’re sorry. Having grown up in the former Eastern Bloc, I vividly remember the bizarre and beautiful monuments commissioned by the communist leaders of the 1960s and ’70s, which remained as retrofuturistic remnants after the fall of communism, like the undying ghosts of an era most people sought to forget but would always remember. These are the subject of Spomenik—a peculiar book by contemporary Belgian photographer Jan Kempenaers, who took a laborious trek across former Yugoslavia and The Balkans to photograph the strikingly beautiful yet odd structures tucked away in the region’s mountains. The results are haunting and eerily powerful, evoking a felt sense of a fold in the space-time fabric of sociopolitical reality.

“Kempenaers did not set out as a documentary photographer, but first and foremost as an artist seeking to create a new image. An image so powerful that it engulfs the viewer. He allows the viewer to enjoy the melancholy beauty of the Spomeniks, but in so doing, forces us to take a position on a social issue.” ~ Willem Jan Neutelings What’s most fascinating about the structures in Spomenik is that up until the 1980s they attracted millions of visitors, yet today they stand unknown by the younger generations and neglected by the older, their symbolism a fading flashbulb memory in the collective mind of their host cultures.

This post also appears on Brain Pickings.
Via MetaFilter. Images via Crack Two.

Its all the rage these days and its dead easy to do. QR codes allow people to scan a barcode with their mobile phones and then be directed to a URL or webpage without having to type anything into their phone’s browser. Its a cool way to bring people to your website or give them access to a competition page or whatever 🙂

This is Wikipedia’s definition of a QR code:

A QR code (abbreviation for Quick Response code) is a specific matrix barcode (or two-dimensional code) that is readable by dedicated QR barcode readers and camera telephones. The code consists of black modules arranged in a square pattern on a white background. The information encoded may be text, URL, or other data.

This short URL/webpage includes Google Analytics which allows you to track how many people scan/click through to your page. The user is then automatically redirected to the original URL.

2. Go to http://createqrcode.appspot.com/ to generate the QR code.

Paste the Google short URL in the field to generate the QR code. Choose 500×500 image size to get the biggest size so you can use it in print as well.

3. Right click on the QR code and save the image.

A whole bunch of folks have been sending over Andy Baio’s tragic story of having to pay $32,500 to photographer Jay Maisel for his use of an image, which he still believes was fair use…

I’m best known in the comics world as a letterer, which I’ve been doing since 1977, working with writers like Neil Gaiman, Alan Moore, Bill Willingham and many others, and collaborating with a host of artists including J.H. Williams III, Gene Ha, Don Rosa, Michael Kaluta, Mark Buckingham, Kevin O’Neill and Alex Ross, to name but a few. I also design logos, covers and interior pages for comics, and have credits as a comics writer as well. In 2004 I co-authored THE DC COMICS GUIDE TO COLORING AND LETTERING COMICS, more about that in the HOW TO section. Click the word balloons to explore things I’m involved in.

Other stuff I wrote